NORTHFIELD, MINN. (Dec. 20, 2018) – Northfield Shares, a community foundation centered on philanthropy, volunteerism and collaborative leadership, announced that they received a $2.5 million gift from the estates of Pat Lamb (1934-2018) and partner Ele Hansen (1921-2013). The bequest, which will provide for immediate grants to two local nonprofits, will also establish two new endowment funds through Northfield Shares for the long-term benefit of the Northfield area.

“Northfield Shares is honored to receive Pat Lamb’s and Ele Hansen’s generous gift on behalf of the Northfield community,” said Mike Krance, executive director of Northfield Shares. “Their work throughout their careers and during retirement touched countless lives in education and the field of women’s athletics, and their generosity will continue to touch countless lives on an even larger scale. We are humbled by the trust they placed in us for carrying out their philanthropic legacy.”

The $2.5 million gift includes both short-term and long-term distribution components. 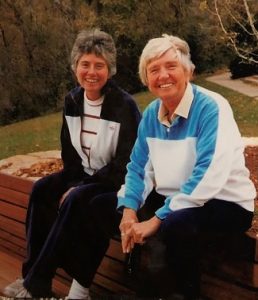 Krance thanks Greg Carlson and the staff at Carlson Capital Management for their many months of work in settling Pat’s estate and enabling this gift to the community to come to fruition after Lamb’s death in January 2018. However, Carlson had built a relationship of trust with Lamb and Hansen that spanned decades.

“I had the privilege of working with Pat and Ele for years—crafting their philanthropic legacy,” said Carlson. “What motivated them was offering a “hand up” to those whom they knew had potential, but just needed a little extra help. This is how they treated the students they taught, and is what inspired their approach to charitable giving.”

Building a Legacy of Impact at Carleton

Pat Lamb and Ele Hansen were lifelong advocates of equal rights and opportunities for girls and women. They were pioneering champions for women’s physical education and influential leaders in developing increased sport opportunities for women, not only at Carleton, but also at the state, regional and national levels.

Hired by Carleton President Larry Gould in 1952, Hanson chaired the college’s Women’s Physical Education Department, taught PE classes, and coached women’s softball and cross country for 34 years, until her retirement in 1986. She was responsible for appointing Carleton’s first women’s athletic director (Lamb) in 1970. 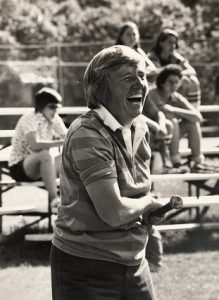 According to Carleton officials, Cowling Recreation Center (aka “The Women’s Gym”), was built in 1965 through Hansen’s strong internal lobbying efforts. It was said to have been the center of an emerging feminist movement on campus, and it provided much-needed indoor space for an ever-expanding program of coed and women’s PE classes and intramurals

From running a nationally recognized intramural program to developing a coaching/teaching workshop that attracted men and women from throughout the region, Hansen was considered a guiding force in women’s athletics at Carleton and across the country.

In addition, former Carleton athletic director Leon Lunder said Hansen was “a strong voice in the Title IX debate and provided an avenue at Carleton to blaze the trail for women’s varsity opportunity.” Her advocacy generated local, regional and national support for the creation and ultimate acceptance of Title IX in 1972.

Lamb embarked on her 32-year at Carleton College in 1962, starting as a physical education instructor. Eight years later, she became Carleton’s first athletic director for women, a position she held until 1985. During her tenure as women’s athletic director, she supervised the development of 12 varsity athletic programs, coaching many of them herself. 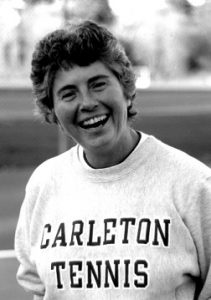 Lamb’s enthusiasm, presence, and love of sport and teaching were infectious and made lasting impressions on her student-athletes regardless of when they attended the college. Heidi Jaynes, Carleton’s women’s volleyball coach from 1999-2018, current associate athletic director, and senior woman administrator, is a prime example of that lasting impact.

“Pat was a huge mentor to me as a coach and administrator, even though I came to Carleton after her retirement,” said Jaynes after Lamb’s passing in January 2018.  “I loved hearing her tell the stories of how she and Ele started women’s varsity and club sports here at Carleton, and Pat made sure we passed on that history to our current athletes.”

Jaynes added that Lamb also loved hearing how current women student-athletes were doing at Carleton, both on and off the court. “Even though she retired over 20 years ago, she still influenced our current female student-athletes and coaches by stopping by practices, cheering us on in the bleachers at games, and taking our female senior athlete award-winners out to lunch every year so that she could get to know them and hear about their experience at Carleton.”

After retiring in 1994, Lamb continued to support women’s athletics in countless ways including the Pat Lamb Award, which is given annually to an outstanding Carleton senior female athlete and scholar. In addition, with several friends she established the Pat Lamb Endowed Tennis Fund to support the promotion, enjoyment, teaching and facilitation of tennis for the benefit of students and the Carleton Community. Now with the $1 million gift to the fund, she will continue supporting those efforts at Carleton in perpetuity.

“It was always Pat’s dream to continue to build on the opportunities and current successes of all our tennis programs and classes here at Carleton,” said Jaynes.  “With her unbelievably generous donation, we hope we can expand on her dream in the future and continue to remember and honor Pat for her commitment to teaching and her passion to empower our students to grow.”

Through Lamb’s and Hansen’s roles as educators and coaches, Carleton was ahead of its time in providing a wide range of physical education instruction, classes and resources for women. Over decades, Lamb and Hansen served as role models and mentors for hundreds of Carleton women, empowering them to pursue their goals by providing abundant opportunities in athletics and outdoor experiences.

In an effort to continue their advocacy beyond their living years, Lamb and Hansen developed a living legacy fund to provide initial and ongoing financial support for a new initiative titled “empowHER.” This initiative will be directed by local women in Northfield with the purpose of carrying out the Lamb’s and Hansen’s good work in igniting surprise and wonder in young women through sport and adventure.

In an interview before her death, Lamb said she and Hansen always agreed on what principles they were trying to instill in young women through their programs at Carleton — confidence, courage, and character. At that time, she recalled, young women never dreamed of playing a competitive sport, but they gradually started participating and it began to catch on. “A lot of them were surprised at waht they could do and what they had inside of them,” Lamb said.

Lamb had observed too many girls saying “I can’t do that.” She wanted those girls to be given an opportunity to step up and meet those challenges. And she wanted to provide them with many experiences to “find that confidence that’s inside them.”

“We have to learn along the way that life isn’t always easy but we can handle whatever is sent our way,” she says. “Handling whatever comes your way has to do with being empowered—you believe in the power you have within you.”

With the empowHER Fund, Lamb noted there was strong emphasis on empowerment, but an even stronger emphasis on the “her.”

Prior to her death, Lamb envisioned that the first empowHER experience would be an outdoor adventure. With the help of seven partners (Northfield Shares, Northfield Healthy Community Initiative (HCI), Carleton College Center for Community & Civic Engagement, Girls’ Circle Support Group, Northfield Public Schools, Northfield TORCH programs and YMCA Camp Menogyn Bold & Gold Outdoor Adventure), five local girls had the opportunity to challenge themselves on seven-day trek through the Boundary Waters Canoe Area in July 2018. This was just the first of many opportunities to come!

“Pat and Ele spent their careers challenging young women to discover their talent and inner strength,” said Kristin Stets, who co-chairs the empowHER initiative with Emily Monaghan. “How appropriate that, even at their deaths, their wisdom and challenge lives on indefinitely. The empowHER initiative will work to honor their mission of instilling confidence, courage and character in girls through adventure, education and community service.”

Making an Impact Out of the Spotlight

According to Lynne Pederson, executive director of FiftyNorth, Lamb and Hansen were giving and caring people who got things done. Their $150,000 gift to FiftyNorth’s restricted endowment will support the organization for many years to come.

“Pat and Ele were very generous to people and organizations that they cared about greatly,” said Pederson.  “However, what they accomplished in the community, as well as the projects and people they supported, were all done in a very quiet manner. They never sought out recognition but rather shied from it.”

Pederson considered Lamb her friend and said she was fun, smart and always interested in other people. She adds that Lamb was very astute about knowing what was needed and worked to get it accomplished—but she could do this in a very smart way.

“Pat networked and brought people together,” said Pederson. “If she and Ele recognized their importance to the community, they never talked about it. They focused only the importance and significance of what they believed in.” 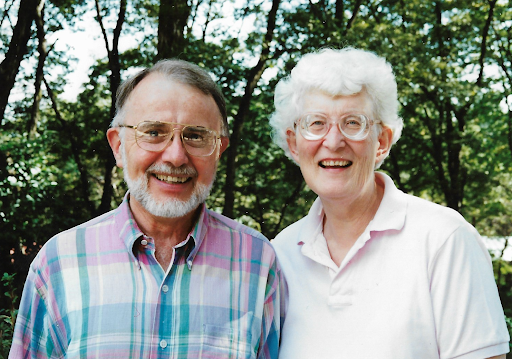