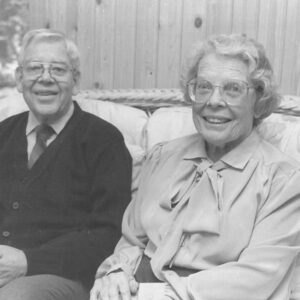 The couple married in 1939 and moved to Northfield in 1946 after Bernie was discharged from the Army. They had four children. Bernie was a beloved local physician and Mary Lou was a very active community volunteer. She was involved with both the Northfield Arts Guild and Northfield Historical Society at their very inception and spent many years helping them grow. She also volunteered with Project Friendship. At home, Mary Lou liked sewing, canning and entertaining, and she and Bernie were avid travelers and gardeners and enjoyed their cabin on Women Lake in northern Minnesota. An article in the Northfield News goes on to tell the family’s story.

The Streets made a powerful impact in our community during their life here in Northfield. Sadly, Bernie passed away in 1990, and Mary Lou followed in 2007.  Their impact, however, continues today, tomorrow and beyond because the Streets left a legacy gift to our community foundation and several other local charities.

Since 2007, their legacy gift to the foundation has funded over $3,200 in grants (as of January 2020), and the original gift is still working and generating earnings which will be available to grant for generations to come.

Thank you, Bernie and Mary Lou!